I went to a new little Indian restaurant for lunch the other day. It's called Cholanad and it is fantastic! The sign said they opened at 11:30, but I got there a few minutes after that and the door was still locked. I stood around waiting for a couple of minutes until the bartender saw me and opened the door. The place is brightly lit and has a modern feel. The bar is nice and long with plenty of seating. As soon as I walked in the place, I felt it would make a nice lounge. Some of the seating was semi-private with high walled curved seating, as if you had been in a small capsule.

I ordered the vegetable kurma and butter naan. It arrived pretty quickly. The plating was nice with modern style dinnerware in pure white. The naan was deeelicious! It wasn't the usual soft naan. It was flaky and full of ghee on the outside and tender on the inside. The kurma was also superb. I'm a fan of the more spicy dishes, but this was flavored so wonderfully with a ton of ginger and garlic and I didn't miss the extra spicy flavors I usually crave. I also loved that they didn't cook the vegetables into a mush. They sliced them into matchsticks and left them slightly crunchy. It was a beautiful pairing. But after dropping close to $11 for this lunch, it will have to be a once in awhile outing. A- 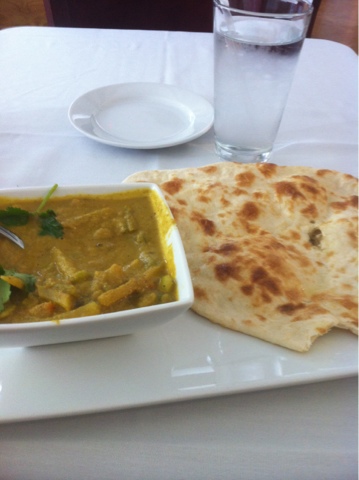 tell me about myself and/or gripe and moan to me here:
thegreenpeacock AT yahoo DOT com

What is the green peacock?

The green peacock is a food blog where you will find restaurant reviews and vegetarian recipes from around the world.

Alpa
Texas
A financial analyst working for a non-profit who loves to cook, photograph, read and travel. So put up your feet and grab a cup of coffee and join me for a bit of mischief and adventure.